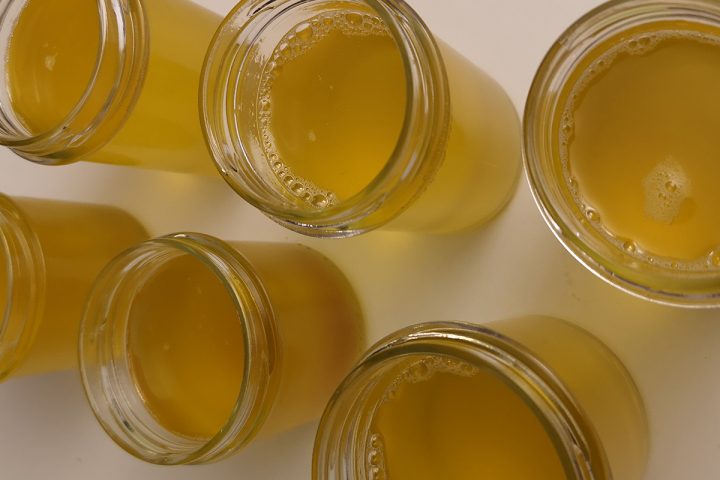 My paternal grandmother used to render chicken fat and I remember the luscious taste of it on bread. I liked it much better than butter or the awful margarine that my mother substituted for butter briefly, in the 1960s. (The entire family revolted against this short lived health craze, which turned out not to be nearly as healthy as it was supposed to be.) After my grandmother’s death, I occasionally found a jar of chicken fat when I was lucky enough to run across a Jewish deli, but it never tasted as good as Grandma Evelyn’s.

But it wasn’t until recently (by which I mean, in the last decade) that I thought of rendering chicken fat myself.  I had decided to cook some traditional Jewish dishes that required it as an ingredient and so I went to my local Swiss butcher and ordered about 2 kilos of skins. It turned out that rendering was simple, though it required patience.  Now it’s a ritual I perform once or twice a year.  Though the skins don’t require much tending as they cook, it is an all-day affair.

It doesn’t really matter how many chicken skins you start with. The process is the same for 1 kilo or for 5 (usually, I do it in batches of 5 kilos because of the size of my pots and my stove).

You can cut the skins into smaller pieces if you want. I don’t do that, but some prefer it.

Dump all the chicken skins into the largest pot you have and add enough water to almost cover it. Add ¼ teaspoon of salt per kilo of skins (less or none if you prefer unsalted butter). Bring the liquid to a simmer. Then walk away for 15-20 minutes.  Upon your return, give the contents a stir. Then walk away again. As the hours pass, you’ll see the skins shrinking relative to the liquid in the pot. The liquid begins to boil and bubble. This is the water in the skins boiling off.  The more skins you have, the longer it takes.

As the water cooks out, the liquid will get thicker and yellower. The skins will also start to turn golden, and then golden brown. When that happens, you know the water is gone.  The less water in the pot, the more careful you need to be about stirring and not letting the bottom burn.  Keep the temperature at a simmer because there’s no coming back from burning the skins: the whole batch will taste bitter.

When the water is gone and the skins are golden, but not brown, you can start pouring the fat off if you’re cooking a large batch of skins. Otherwise you can wait and strain at the end. I strain the fat into sterilized canning jars because I intend to use some of them months later.  Cover the jars of hot fat with muslin or cheesecloth to keep out the bugs, but let the jars cool entirely before sealing them and storing them in the refrigerator or freezer: you don’t want water condensing on the inside top of the jar.

If you’ve drained off fat while cooking a large batch of skins, leave some fat and the skins in the pot and cook the skins until they are golden brown, but don’t burn them.  When they’re the right color, spread them out on paper towels and let them drain.  Strain the rest of the fat into jars.

Those crispy skins, called gribenes, are delicious after they drain, crunchy and better than potato chips (and low-carb).  They will keep a couple of days in an airtight container but in my house they never last more than 36 hours, no matter how many kilos of chicken skin I start with.

If you feel like doing a bit of extra work, you can caramelize onions in some of the rendered chicken fat (again, be very careful not to burn them), and then store the rendered fat and onions in jars. Just reheat the fat at a the same low temperature and add the onions.  The water in the onions will cook off, just as the water in the skins did. Then you can pour the fat and onions into a jar, let them cool, and store them in the refrigerator or freezer.

I find that rendered fat can keep for weeks or even months in the refrigerator as long as you keep water out of the jar.  I’ve kept jars in the freezer for over 18 months with spoilage or degradation of flavor.

Note: This recipe works just as well for duck fat.  Ducks are fattier than chickens, so poke duck skins repeatedly with the point of a sharp-bladed knife, to create runnels for the fat to leak out