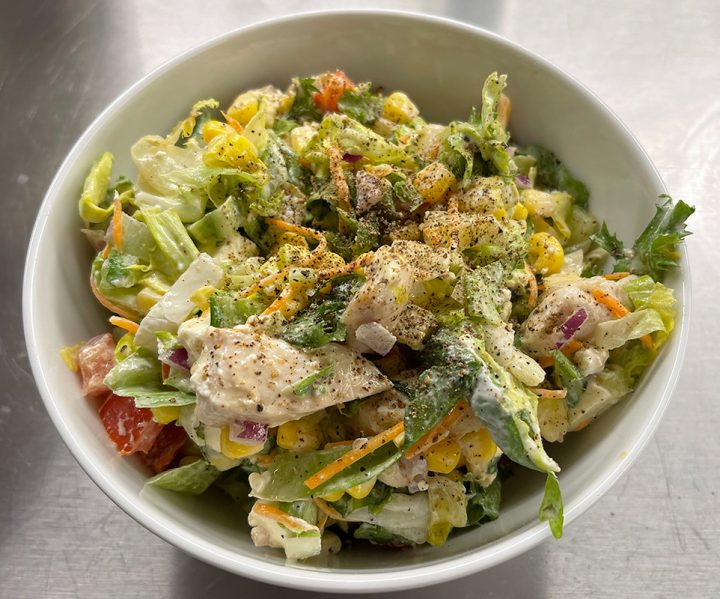 I love to eat salads, but I don’t have the patience to do all that chopping and cutting, so my husband Murat is the salad maker in the family.  In the beginning, he chopped the vegetables, meat, and cheese, and I made the dressing.  Now he makes the dressings too, except when I want to try something new. Turkish salads tend to be chopped much smaller than the salads I grew up with in the U.S., but I’ve learned to appreciate chopped salads because it’s so easy to get all the different salad flavors into one mouthful.

His salads are always based around some kind of sweet lettuce (I’ve mostly weaned him off iceberg), cucumbers, tomatoes, and red or yellow bell peppers. Lately he’s also taken to adding a handful of bitter greens. Because his salads are main courses, he usually adds a meat (mainly chicken breast or tuna) and Turkish cheese (beyaz peynir, which usually comes in a can and floats in salt water, like feta).  Sometimes he substitutes smoked trout (surprisingly inexpensive in Switzerland) for tuna.  Often I cook the chicken breasts sous-vide in my 8-quart Instant Pot, because I love the silky texture.

The nice thing about the chicken salads is that they can be flavored any one of a several ways.  They are nice with fresh French or Italian herb combinations (thyme, oregano, sage, rosemary, etc.), oil and good vinegar. (Sometimes he’ll add beets to the salad and then I use a raspberry vinegar.) When I’m in the mood for a little heat, I use a hot Madras curry in yogurt and toss in a handful of raisins and cashews or sunflower seeds. Or, I might use a sour cream dressing with chipotle chiles and toasted cumin and toss in a handful of toasted pumpkin seeds, if I’m looking for a Mexican flavor. The fish salads are usually finished with a yogurt dill dressing (with or without garlic, depending on my mood).

Though chopping and cutting takes time, the dressings are 5-minute affairs, and the salads make great lunches or dinners. They allow for almost infinite variation, depending on the season and available ingredients.